“Wander a whole summer if you can…time will not be taken from the sum of life. Instead of shortening, it will definitely lengthen it and make you truly immortal.” John Muir

After leaving Willis Creek I was headed towards Escalante and the famous Hole in The Rock Road. The road is a 57 mile washboard that leads to a big Rock with a hole in it. Back in the 1800s, Mormon pioneers set off in a large wagon train to further their settlement of the Southwest. When they reached the cliffs overlooking the Colorado river, they found a large rock blocking their path. Instead of going back and finding a new route, they blasted through the obstacle to reach the other side. My car could only go about 34 miles, so i didn’t see the rock in person…but I sure do appreciate their journey.

At 34 miles is the trailhead to access Coyote Gulch and where I was meeting some friends. Tickled Pink and LB are currently hiking the Hayduke Trail which travels 800 miles from Arches National Park to Zion. This hard to access location is one where they had to bury their provisions ahead of time in buckets as there is no easy access to a town. Since I had a car though, I brought extra goodies to give them some trail magic as our paths crossed.

We ended up spending the night and almost an entire day under the shade of the only tree for miles as we drank some beer, ate good food and swapped stories of the road. Pink is also my hiking partner for the PNT later this summer, so getting in some hikes of my own will keep me from trailing behind too far when we set out in July…which is what I did as they hiked on up the 50 mile plateau and I into Hurricane Wash and on to Coyote Gulch. 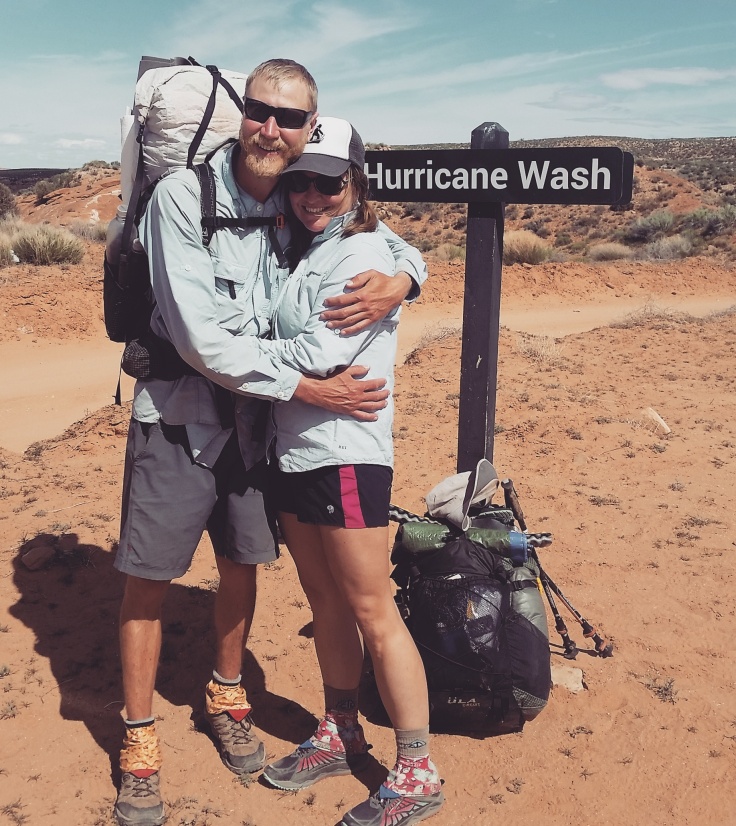 My hike started at about 4pm, but I only planned 7 miles that first day. I had 4 days to hike on my permit and planned to make full use of them.

The wash started out hot and dry. Within a mile I reached a girl of maybe 18 sitting in the trail. She looked at me with big eyes and her face covered in sweat, “Do you know where Hurricane Wash is?,” She inquired, “I’m very lost!”

I was a bit confused as she was smack dab in the middle of the trail and only a mile from the trailhead.

“This is the right trail,” I reassured her, “you aren’t lost at all.”

“You are sitting on it.”

She looked confused so I reminded her that the wash would also take her to the road, though it is tougher walking in the sand. I also made note that she had plenty of water and parted ways with her, knowing she couldn’t possibly get lost in that mile. It is perhaps the easiest mile of trail…I sure hoped anyway. I suppose in hindsight I should have checked in with her more and made sure she was capable; inquired if she was coming or going. At any rate, I passed an older couple who were hiking out shortly after and knew they could guide her back if she was still confused.

As I continued on, the canyon grew deeper adding shade and cool shadows to the trail ahead.

It wasn’t until I reached the confluence with Coyote Gulch that my mind was officially blown. I hiked just about 2 miles into the deepest canyon I have ever experienced coming to Jacob Hamlin Arch and my camp for the night. 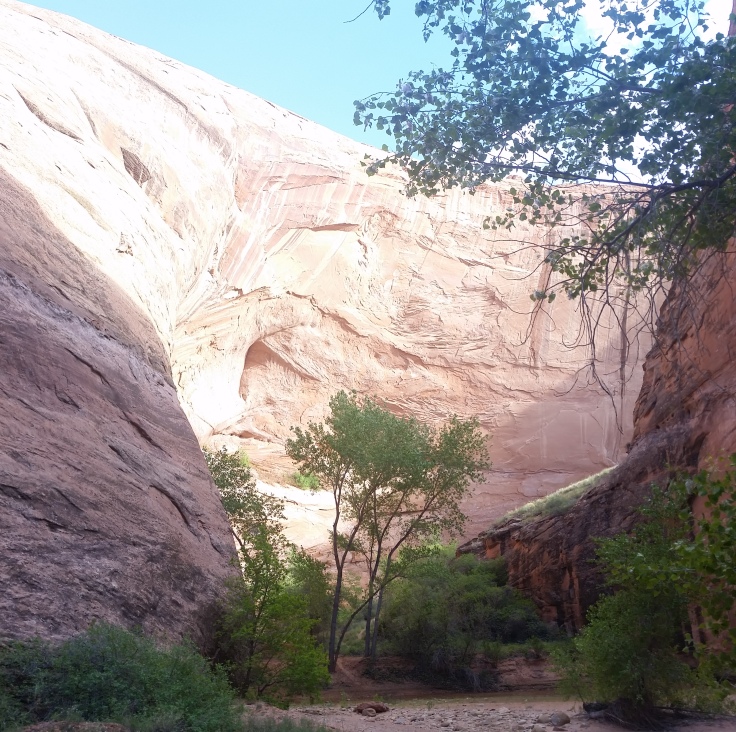 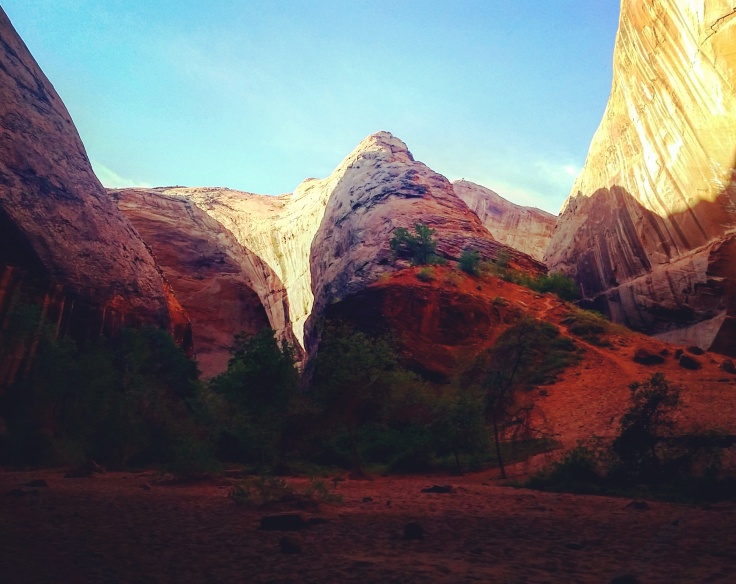 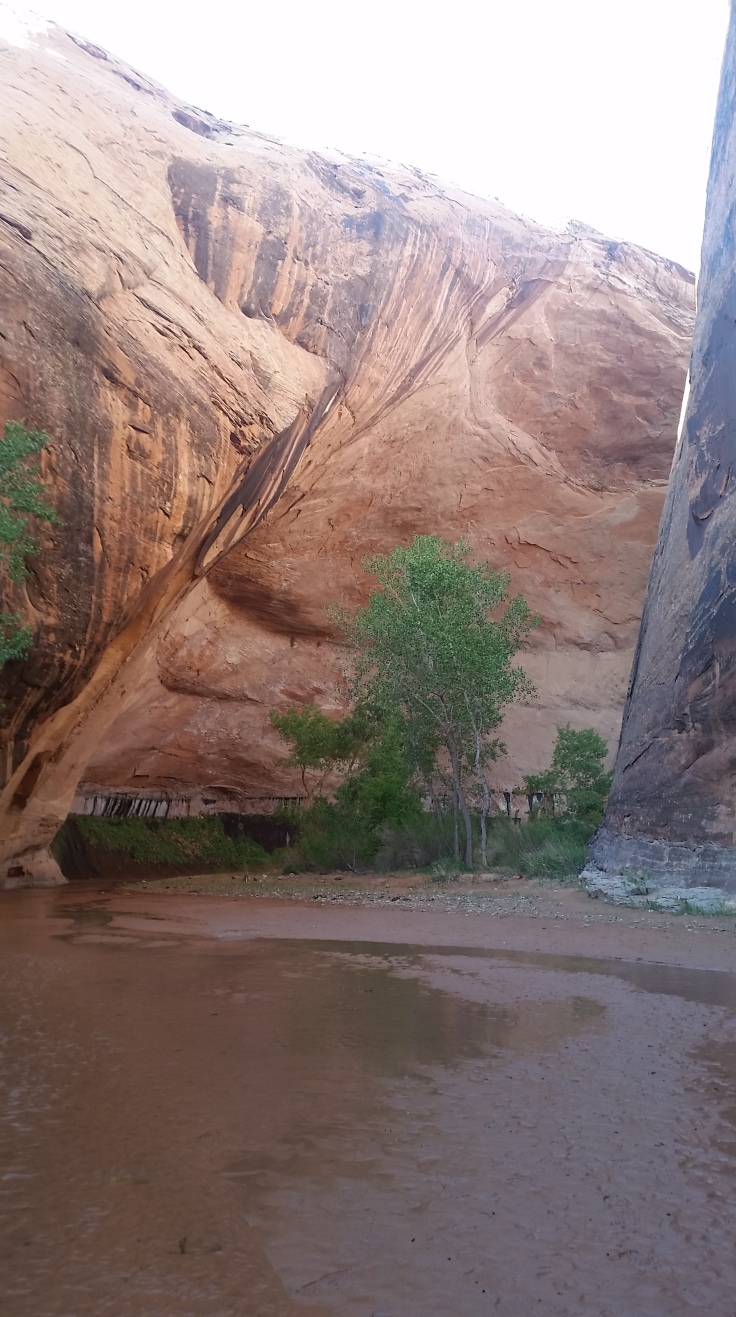 I camped in what turned out to be a natural ampitheater and lay there listening to the wings of birds echo off the canyon walls. The scenery was too large to capture in a photo, the walls too high. Frogs and birds whispered into the canyon and I was comforted by their Symphony as it echoed back to me. I was lying on my back watching the sky darken when a fly came right by my head. I didn’t swat at it and in moments, 2 inches from my face, a bat swooped in and rid me of the fly mid flight. I was mesmerized by my surroundings, immediately ranking this area in the top 5 places I have ever been.

The next day was about 10 miles of sloshing up the canyon to the confluence with the Escalante. Then I hiked up that river (in the water as there are no trails…only canyon walls) for another mile to Stevens Canyon. I spent the next few hours climbing over giant boulders and scaling some of the walls to reach a grotto up canyon. I had planned to camp there, but then decided to head back to a cave I had admired on the Escalante instead. The day was rather young after all.

I set up camp in the cave, on the bank of the river and did yoga with the sunset. Again I was able to lay there listening to the echoes off the rocks around me wondering if any of it were real…as it all seems like a dream. 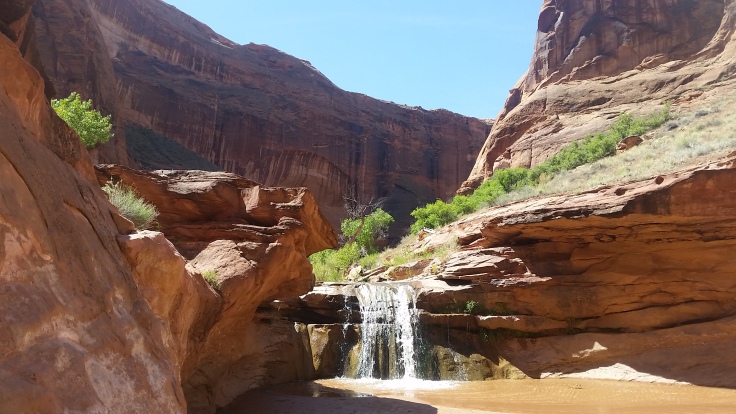 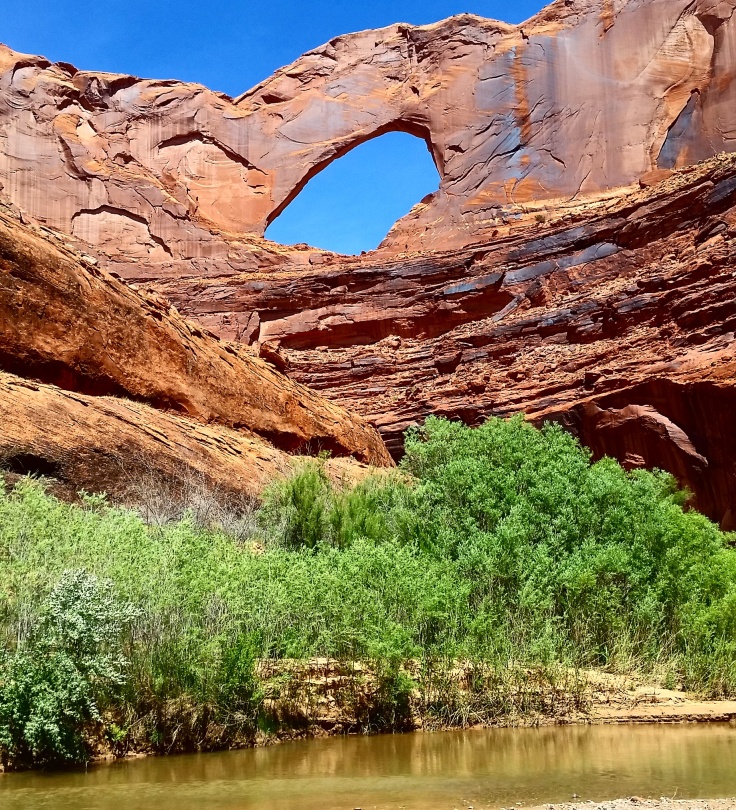 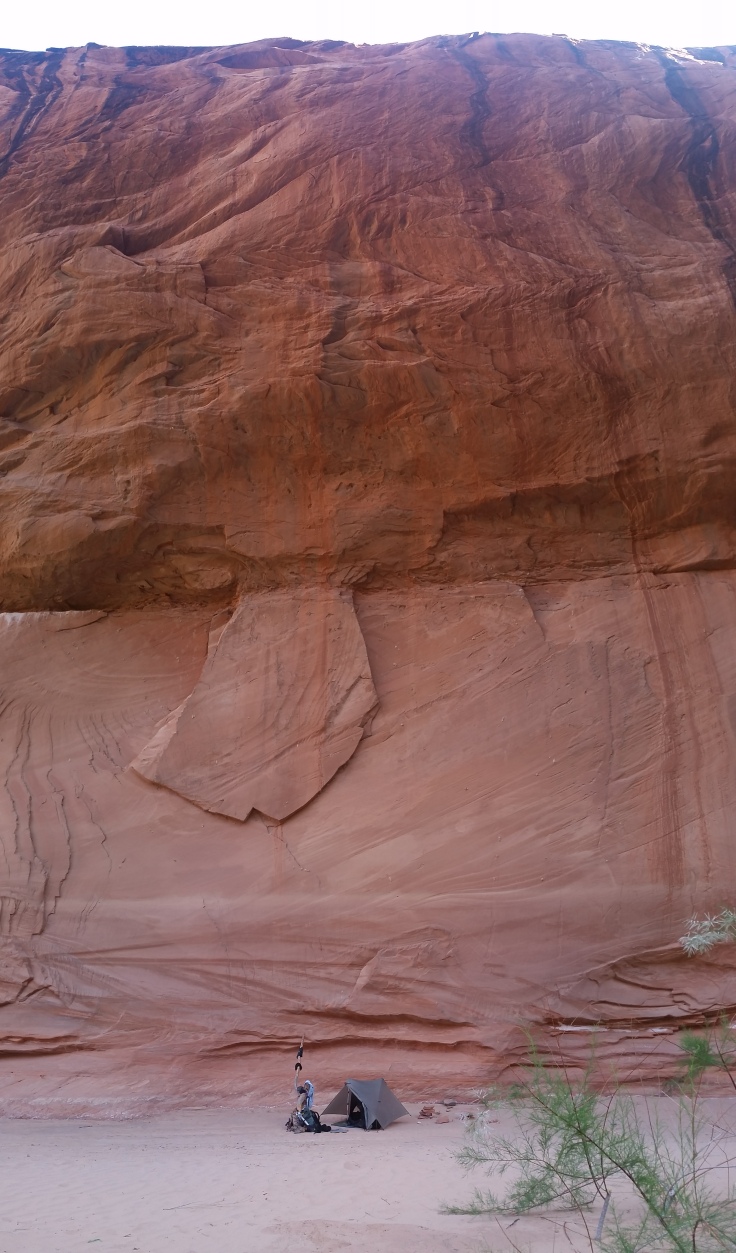 The following day, I spent exploring side canyons for cave dwellings and pictographs I had heard about. Though I found none, I had a blast exploring and did find a really cool cave to eat lunch and have a siesta in. 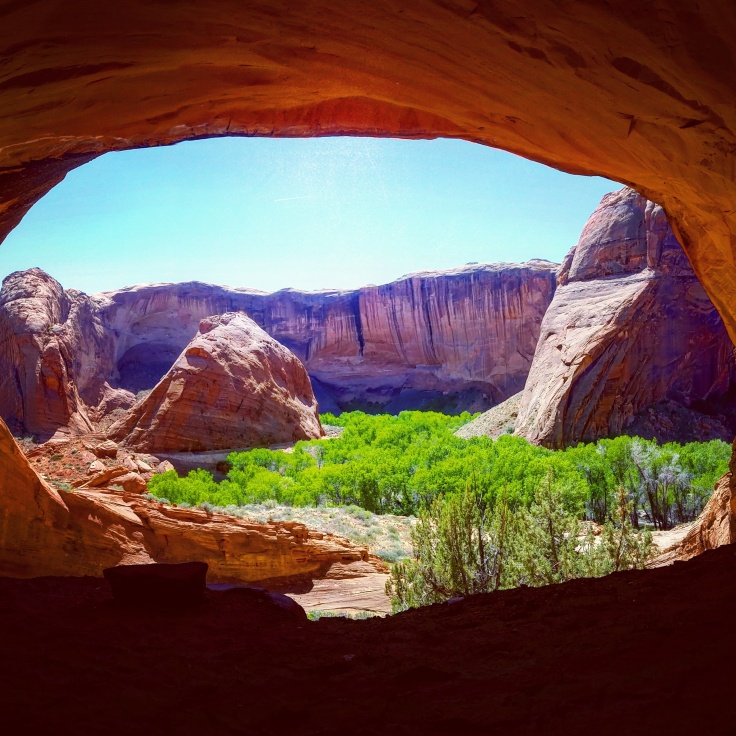 The rest of the hike continued to be dreamy and I found myself not wanting to leave. Alas, as I have learned before, all good things must end…and there is still so much more to explore! On to Arizona! 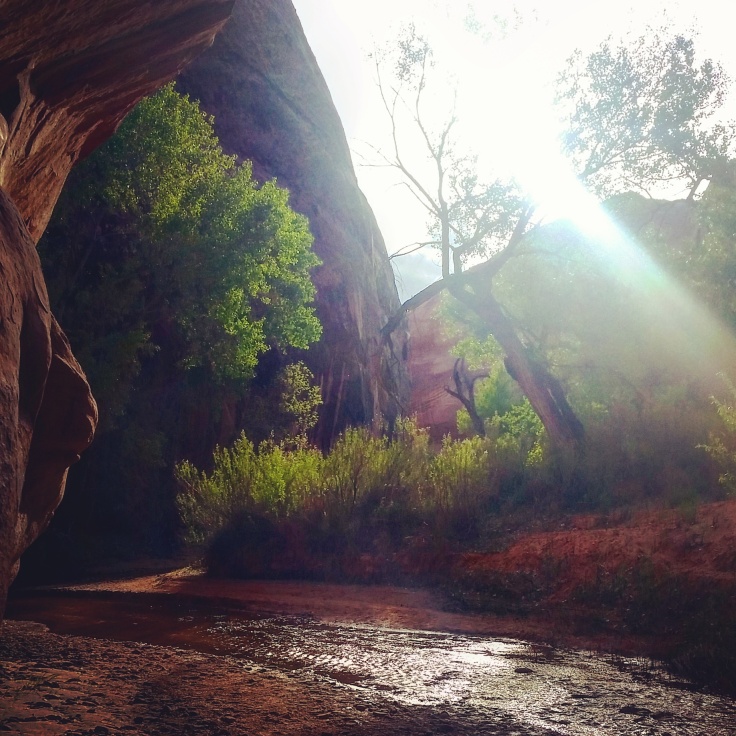 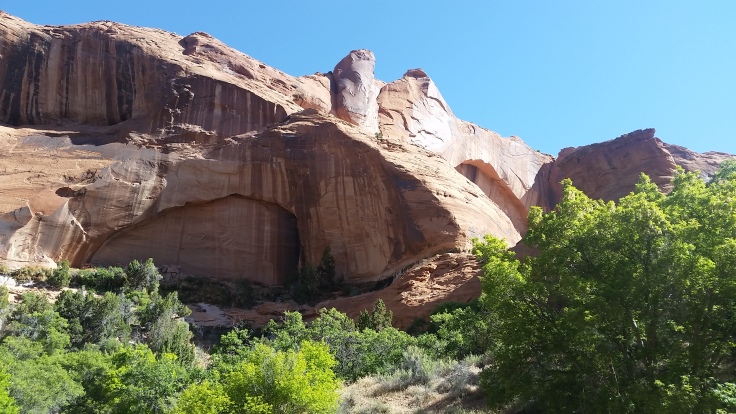 Hiking for cheeseburgers since 1978